Takachiho was an ancient town on the north of Miyazaki, Japan. Believed to be the holy ground where the Gods descended. So yeah, myths / legends and the bunch was born here. Well known for their breath-taking Takachiho Gorge, Kunimigaoka heavenly cloud hike and 1200+ years old shrine. The prefecture pamphlets tended to only show the Gorge, but their shrines could easily rival Izumo shrine – less crowds and older trees.

Upon arrival at the Takachiho bus stop. There was a tourist centre just 30 seconds next to the bus terminal. Not much was in English, but they had a bunch of shitake mushroom tea for free. Tasted more like soup though.

From the bus terminal, I took a 45min walk to get to the gorge. The major hint on whether you were on the right path was that there was only ONE street with a bunch of flags and folklore models on display.

On the way to towards the Gorge stood the Takachiho Shrine. It was super old (1200+ years) and the look advertised for itself. The tree was only 800 years old, totally young. The shrine was the source of many Japanese myths. A must visit according to the locals, even more so than the gorge.

**If Takachiho Shrine was too creepily old for your taste, there’s  the younger Kushifuru Shrine. It was only 300+ years old (built in 1694)

Skipping the taxi was worth it. The walk was pleasant and Takachiho shrine was on the way. Gorge had no entrance fee and modestly developed for tourism.

Really hard to explain the view. **I am no Charles Dickens. All the photos had no filter/no editing, the place just looked that good.

In July, there are boat rides. I was there out of season, but I could only imagine that the boat ride was the only thing that could top it off.

In the area: ‘flying noodle’ a dining experience next to the Gorge 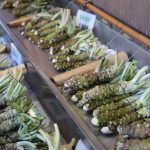 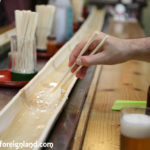