Spotted a male and its babies 😀 Cassowary is the world 2nd heaviest bird. They’re far more endandered than koala. There’s approximately 1200 of them left in the wild!

Like many other Australian animals, this one kills and eat poisonous stuff. It has claws similar to the raptors (dinosaur which opened doors in The Jurassic Park). It specialises in disembowel its threat, like us humans. They’re the no. 1 human killing bird.

I was doing the rainforest walk in Cape Tribulation. It was pretty quiet with bugs making sounds and the occasional birds moving in the trees. Then suddenly, a branch breaking sound was coming from behind the bush…

There he was, standing 1.4m (?) high. The babies were out in the open first, the papa bird followed. I was really excited 😀

I am no expert with birds. Th only reason why I know that it’s a male is because of their known habbits. The male looks after the young from between 6-18 months. Well, as soon as the chicks becomes big or relatively threatening size, papa bird will kick them off the territory. Territory means everything to these birds. They live in solitary and don’t play well with others. They’re naturally aggressive.

Like the koalas, they also eat stuff that are toxic. For example, this blue fruit here, cassowary plum. Word of caution, if you touch this fruit, don’t touch your eyes or eat without washing your hands thoroughly.

According to the local signs, cassowary are critical to the ecosystem as they’re the only ones that can distribute the toxic fruit seeds. Some seeds even needs to go through their digestive system to function properly.

I did not have my 300m lens, so yup, this was a close encounter. I was less than 1m from this stunning creature 😉

Spread the word and save some birds 😀 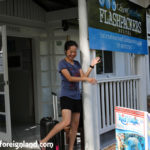 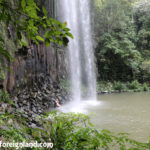