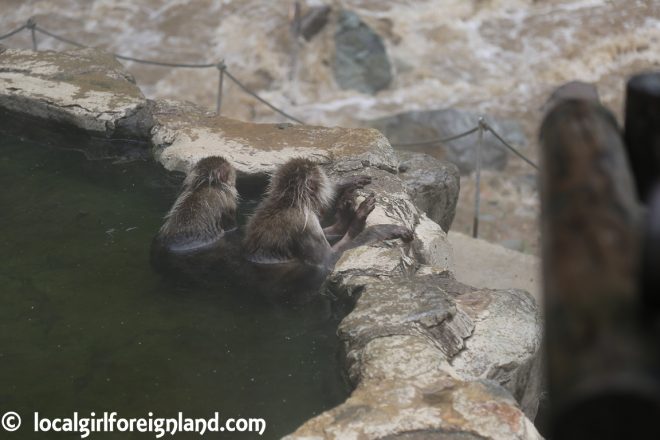 What do they do when there’s no snow? Journalists are obsessed with their snowed up look. Without the snow, they do look less funny 😛 but hey, they are cute with or without the snow. Snow monkey is uniquely Japanese. They NATURALLY go for onsen baths in winter. This is their way to keep warm, well, and to get a red flush of colour for their faces.

We stayed at Shibu onsen. So it was a 45min uphill walk to visit the park. It was a pleasantly serene tar road walk, but steep. I managed it with a pair of flip flops LOL Not recommended by the way. I was just too lazy to change shoes after one too many baths haha.

After the parking lot, the path was no longer easy… rocks, mud and all the other nature goodness. Again, I was still wearing flip flops. They’re basic ipanema, in case you’re interested, and thankfully did not die out on me. I had them for 4 years already, my travel staple.

Yes, that can was a gigantic tropical grade mosquito repellent

Anyways back to the monkeys. They’re EVERYWHERE… That’s before we arrived at the park. O, the first house that we came across was actually a hotel of sort. They’re very firm about non-guests not to use their facilities (fair enough). I was actually more interested in how they manage to get anyone’s luggage up or down from that place.

Anyhow, monkey droppings were also everywhere. Visitors beware of stepping on some ‘bombs’ 😛

At the ticket gate, there’re small coin lockers available. If you have food on you, this is the point to leave and LOCK your food. They’re wild monkeys. This park has been around since 1964, they know what they’re doing. Leave whatever snacks you have in your bag. It goes without saying, don’t touch the monkeys.

The monkeys were surprisingly indifferent to human visitors. No matter what the lens shape / size, these stars of the show seemed to be used to the drill. They even have their own live cam show. It’s on 24/7!!

Those baby monkeys were too cute.

It was summer time, so I was really surprised that they still went in for the onsen by themselves… soon, we found out that the park lowers the onsen temperature AND put in some snacks. So of course there were lots of willing monkeys even though it was off season for them.

No matter what enticed them, they looked like they enjoy the bath with their pals. Don’t you think these 2 looks like 2 salary men by the izakaya? LOL

Entrance fee: JPY 500 per adult **please do visit their official site for the most updated price / opening hours info

Around 4.2km from the Yudanaka station (all uphill). Taxi is recommended. direct bus is available in winter only There’s an information centre at the Yudanaka train station, you can find out if there’s any public transport before taking a taxi.

Largest train station nearby is JR Nagano station. It takes 50min by train from Nagano to Yudanaka. This train is NOT covered by JR. The regular train is JPY1160. For the express, pay an extra JPY100

If you don’t take the express, you’ll land up having to switch train at Shinjunakano. There are NO elevator at this station. If you have large luggage, just pay the extra and use the Snow Monkey Express. It is a direct painless train.

There are day passes available at Nagano station (the private rail side). For the most updated information, please visit their site. Snow Monkey Pass (official website)

In my notes, I paid for a 2 day pass for JPY3200 at the Nagano station. I couldn’t find it on their official site. Perhaps it is no longer available? It covered the usual unlimited train ride + snow monkey park ticket. Good value for money.

This particular portrait is taken by my hubby. It is our favourite monkey photo from the trip.