Hubby was slowing morphing into Grumpy… he was hungry. So was I 🙁 In any case, since we’re in Japan. It will only be logical that there’ll be vending machines eventually. I was SO wrong. 2.7km uphill hike with ZERO vending machine in sight. We did not have breakfast either. We were expecting some food tourism …>_<… Just a starving couple celebrating our anniversary by involuntary fasting in a foreign country.

Towards the mountain top, we came across this simple hut. YEY! We’re SAVED! Soft drinks vendor 😀 Sugar drinks was better than nothing. Visitors beware, the vendor lady was more grumpy than my hungry husband.

Out of no where, there’s a tourist attraction! Cave of Oni’s loot 😀 Hm… that sounded interesting. Japanese folklore about Ogres looting the villagers. Of course, Momotaro (Peach boy, aka hero who fought against ogres) was there to save the day. The cave was damp and rather cold.

I didn’t know how to appreciate this attraction. I felt that the displays were a bit repetitive? But then, the Japanese family that we bumped into were really into it. So I guess it was just me? I don’t know enough Momotaro stories to fully enjoy this. Well, that and the fact that I was still starving.

After the cave, we decided to descend; seek civilization and hopefully some food. We found a fab picnic spot. Agony.

Finally, there was a restaurant that was opened!!! We were like, we’ve never seen something more beautiful / exciting! (said 2 starving people)

Alright, we’re back to our normal selves. Let’s do some tourism. The art festival (Setouchi Triennale) was on, let’s check that out!

Er… what? This piece of art was titled ‘Nothingness’. That was an empty house. Er… Where was the art part? I didn’t get it. Anyhow, that’s kind of my reaction to several contemporary art master pieces. So I won’t bore you with my lack of artistic sense.

This concluded our anniversary celebration and we sailed into the sunset back to Takamatsu.

How did I get here?

We boarded the ferry from Takamatsu pier.

The Cave of Ogre loot

**We were here during off peak season 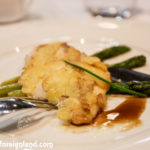 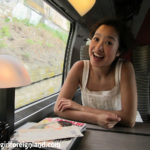 Cheap ways to travel around UK