Followed a local to find these 2 places. No crowd for sure, because there was no one there  and NO path for the temple (road was a big ask in this case).

This hidden gem was built in 1930, designed by a prominent Hugarian architect, Ladislaus Hudec in 1925. Mr Hudec was an important man, he did 60+ buildings in Shanghai and a top architect of his time.

In 1966, this Byzantine style church was damaged by the cultural revolution. Fortunately, they used the church as a school 1968, so not the whole building was trashed; lost all the stain glass and that sort of thing. By 1974, the church’s cemetery was redistributed to be used for Shanghai Botanical Garden’s nursery (just lovely). After 42 years of non-church activities, the church was reopened for Catholic service in 2008.

This church actually close their doors(!) It is best to visit on Sunday between 8h00-10h00. There is service on Sunday at 8h00. Chinese service only. Otherwise you may get a nasty closed church surprise.

(2) Temple (no idea what the name is, there is no road), near Ye Nu Jing river 野奴泾

This temple was built behind the church.. It kind of looked like a Taoism thing. Not sure really. The temple looked finished, but there was no access anywhere.

The view was worth walking through the bush. I mean, when will you EVER see an empty place in Shanghai? As a deprived person, I felt that it was worth it. Could only see it by climbing the wall or through the slits of the walls. It was more like the small child in me just wanted to do this.

There was no nearby subway. The closest public transport was the bus.

Taxi – No. 1 Ke Le Road, near Hami Road ==> will like to emphasize that we only saw 3 cars the whole time, so if you want to take a taxi to get home, either you call one or you’ll be waiting for a long time 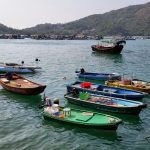 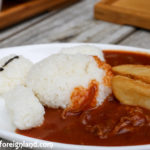