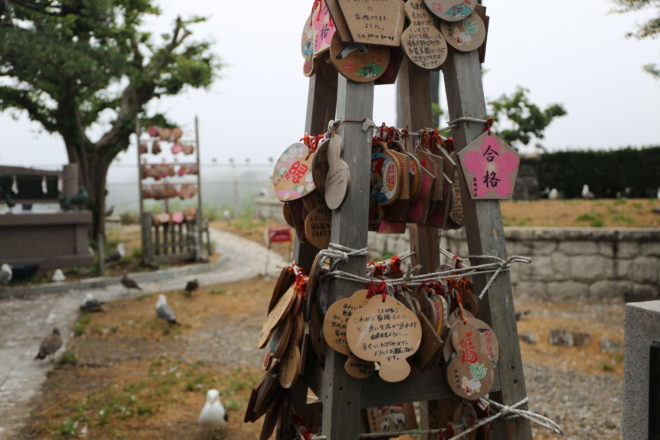 Welcome to Kabushima Shrine, shrine of the sea gulls. Located on a beach with beautiful view, plus thousands of sea gulls.

The stench of faeces was nauseating. Yet, some brave locals held their heads up high to visit this shrine. It was bio hazardous! I meant, surprises dropping from the sky all over the show. These worshippers’ faith was strong.

Approaching 200m, I could already smell something ‘fishy’. By the time that I reached the stairs, I was about to throw up. So I ran up the stairs as fast as I could without breathing.

Those were REAL sea gulls, not statues. There were THOUSANDS of them in the sky and then another THOUSAND on the shrine…

I didn’t know whether I did the right thing running up. The smell was even stronger up there. BUT a lady, dressed in the shrine kimono was WORKING there calmly. O_o Nothing could express my respect for this shrine lady. How did she do anything without wanting to throw up and still graces her duties elegantly?!?!?!?

The sea gulls owned this place. It was their breeding ground as well.

Barely managed to take any photos, since I had to hold the umbrella and my nose.  Please excuse my photos for this post.

For an exceptional shrine experience that you don’t intend to forget. Kabushima Shrine is THE choice.

Can’t remember exactly, from Hachinohe to Same was less than 15min. There were very few trains, check the schedule in advance.