My photo says it all I think. Look at that VIEW!!!! Nothing had been photoshop. The water was THAT blue and clean.

There were lots of eateries near the cliff. No hunger / thirst worries.

This beautiful cliff did have a dark side. Well know as a beautiful sunset spot, but also as a haunted place. I came across a local who advised against visiting this spot for the sunset.  To be clear, I am no historian, but the tale goes like this…

Okinawans were not treated as valued Japanese. The imperialist of the time used Okinawans as ‘sute-ishi’ (equivalent of a pawn) to delay the attack on the main island for as long as possible. This included child soldiers, kamikazes and all sort of other unthinkable methods. Tragically (for USA & Japan), full on military engagement took place while all the civilians were on the island. To make the matter worse, Okinawan civilians were educated that suicide and parricide were both superior options than being captured. This cliff was one of the exits… This was one heart wrenching spook story. Accordingly to the locals, because so much blood had been spilled, spirits still lingered to the cliff…

Away from the spook / war story. Check my hair out! Yup, my hair was (sadly still is) naturally curly. By the grace of this gale, this lion mane look was achieved. Traveling solo was not easy. Fellow tourist was hard to come by. There was no chance for a re-take.

This is in the same route as ‘Okinawa Ryukyu Village / Ryukyu muraRyukyu traditions relived – Okinawa, Japan‘ 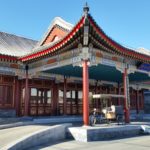 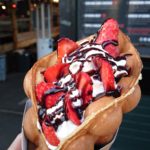